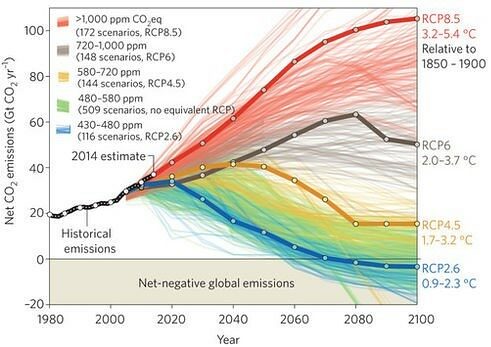 It’s time someone explained to St Greta and Extinction Rebellion that they are simply wrong about the world we inhabit. No, this is not an attempt to deny climate change. Nor to say that the science underlying it is all wet. I have my doubts about a lot of it, can point to gross errors in what is being said and how that scientific work is being done. Hell, I was once challenged by Michael Mann to do better science than was contained in a Jim Hansen paper, which I did and Mann went very quiet*.

Rather, there’s an insistence that nothing has or is being done therefore we’ve got to do everything right now. This is incorrect.

It is not a choice between reducing emissions and economic growth and jobs. The standout is the UK which has reduced its emissions by over 40% since 1990 while growing the economy over 70%. Many other countries are also proving this point.

This is one of the things that proves much current wailing wrong. Near all predictions about what will happen are based upon RCP 8.5 (RCPs are a series of models/predictions about how emissions in the future will work out). RCP 8.5 being the future which isn’t going to happen. Because we’ve already done a number of things to make sure that it doesn’t:

Technologies are accelerating solutions. Solar costs have fallen 80%. Wind turbines have fallen by half in recent years.

We are, at worst, on track for RCP 6.0 today. I would very strongly argue that we’ve already done enough in technological terms to be on RCP 2.6. That’s the one where climate change is a mild problem that goes away in a couple of decades.

For as the IEA tells us we’ve already done all that hard technological discovery stuff:

The IEA tells us that offshore wind meets the requirements. They estimate global electricity production costs in 2018 at $100 per MW which is rather more than coal-fired power, on the face of it, but actually rather less when the cost of carbon emissions is taken into account. The agency also seem to be indicating that by 2040 the global cost will have fallen as low as $45 per MW – so that’s the cost element accounted for.

But what about the other issues? Well, there’s enough offshore wind in places we can stick a turbine to power civilisation several times over, meaning spare power to do more than just provide electricity – perhaps extract hydrogen, for example, to power those things we can’t do with electricity alone. This also rather neatly solves the intermittency problem, since such a volume of production would mean sufficient geographic spread to never all be becalmed at the same time.

If all of this is true, then we’ve solved climate change. All we’ve got to do is build more windmills, plonk them out at sea and we’re done (those IPCC models really do insist that stopping fossil fuel use is enough) – no need for everyone to turn vegan, no need for those grand plans to reorganise society, they’re not necessary. If we can power industrial civilisation without fossil fuels then man-made climate change becomes something that stops happening.

Now, it’s possible to believe that renewables aren’t the solution. It’s equally possible to insist that there is no original problem. But if we’re to stay within the constraints of that IPCC scientific process then we do have to say that much of what needs to be done to beat climate change has already been done.

We had to find a manner of powering civilisation that doesn’t produce CO2-e emissions. Which we’ve done, according to the constraints used in this area of science. The wilder and higher estimates of climate change therefore aren’t going to happen because the wilder and higher estimates of future emissions aren’t going to happen.

Therefore Greta and Extinction Rebellion can shut up and go home, eh?

*Not that it was difficult, I just read something by a real climate scientist then said it. Hansen had worked out what could be the theoretical top number for a carbon tax. Which was then presented as the correct figure for an actual one. No, it was the theoretical top limit, not the one we should actually apply.

But they won’t go home or shut up, because it isn’t really about climate or CO2. It isn’t really political either, but goes much deeper. Extinction Rebellion is an attempt to address a human malaise, which allegedly the Buddha succinctly identified as “Life is suffering and then you die”. In a Western post religious world, which for the majority, provides for material comfort how is it that we still suffer? Without a religious explanation or profound individual personal insight, collective banding together under Extinction Rebellion attempts to anaesthetise the reality of the pain of human existence. A cause to be… Read more »

I can’t think of an example of a single-issue pressure group that, once their goal was achieved chose to “fold their tents, like the Arabs, and quietly steal away.” Because they’re taken over by professional protesters, and the ones at the top are earning very nicely, thank you.

Yes, and that’s how they got there. The anti-nuclear lobby morphed into a green movement which adopted climate change. It’s one reason why the Greens still object to nuclear despite it being the “cleanest” of all.