Now of course we all expect The Guardian to get economics wrong. As with everything else – The Guardian, wrong about everything. Always. But those who would opine on economic affairs and the state of the world, we need to hold them to a higher standard.

Which brings us to this from Richard Murphy. He wants to tell us that developing country debt is the most appalling problem and therefore everyone should do as he says. Which he illustrates with this:

Now check his source in The Guardian: 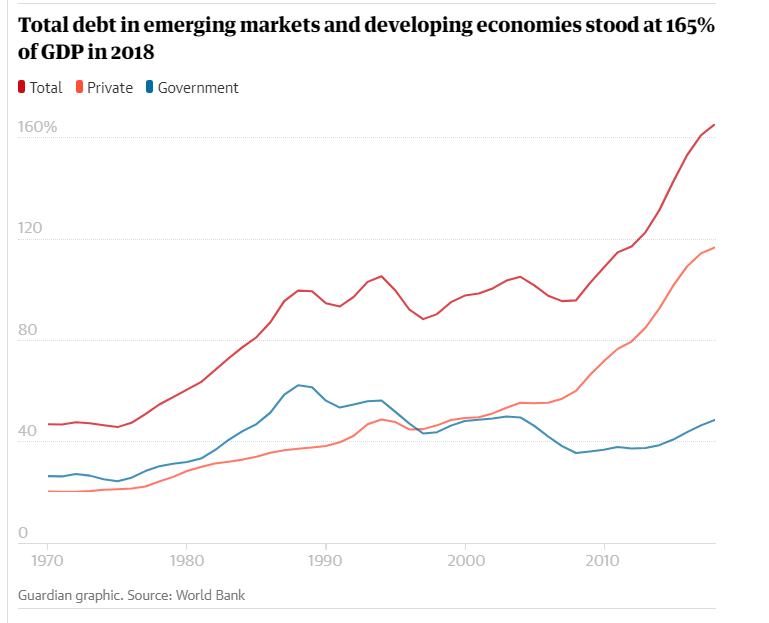 But now we’ve got the man insistent that the global economy should bend to his will unable to understand the difference between a cash sum and a percentage of GDP.

Richard Murphy, unable to spot the mistakes in The Guardian. It’s a great recommendation for an economics professor, isn’t it?

Dunderheads At The Progressive Economy Forum

Guardian now has a footnote: “This article was amended on 9 January 2020 because the heading on an earlier version of the chart gave 165 as the dollar figure for 2018 debt in emerging and developing economics – instead of as the percentage of these countries’ GDP.”

That was Tim’s point – Professor Potato is too stupid to know the figure of $165bn was incorrect (because it was too low). He should have known the dollar value was far higher for it to be an actual problem.

Murphy is a fool

As soon as I saw that “$165bn” the ‘it’s wrong’ alarm bells started ringing; then I tried $165Tn but seems too high and $16.5Tn too low. Left seem to have severe difficulties with numbers

The growth is debt is largely private. That’s unlikely to lead to the debt issues of the past, which were government’s struggling to repay.

Read the rest of the entry – apparently he had the solution years ago. Ban advertising and consumption and turn the world economy (no mere UK for the Great potato) over to him and all the problems will solve themselves – to paraphrase ‘the Treasure of the Sierra Madre’ – ‘Growth, we don need no stinking growth’