Why Romer and Nordhaus For The Nobel

Sure, there’re a million people writing columns about this right now. But this seems an entirely reasonable overview of why. From The Conversation:

William Nordhaus and Paul Romer have been awarded the 2018 Sveriges Riksbank Prize in Economic Sciences (colloquially known as the economics Nobel). Both are macroeconomists dealing with long-run dynamics – big questions of what spurs economic growth, the importance of sustainable growth and how to tackle climate change.

The mainstream economic analysis of the 1970s, when Romer was a graduate student and Nordhaus was an assistant professor, was mostly dedicated to what’s known as general equilibrium analysis: if consumers were to maximise their utilities, and producers were to maximise their profits, what would happen? Both Romer and Nordhaus provided key insights to thinking about what happens over time. That is, how our individual decisions today shape the outcomes for society as a whole in the future. They both framed their ideas in the then-nascent field of economic growth, and both changed it completely. 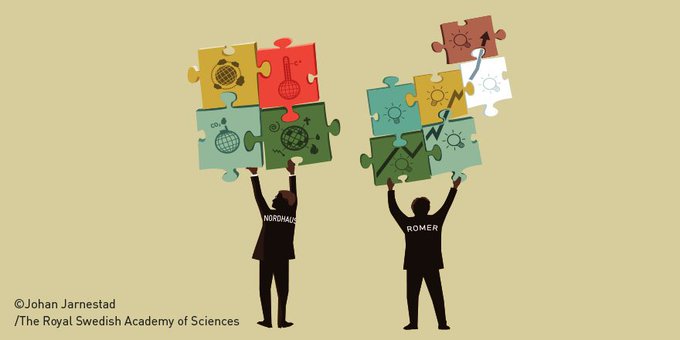 William Nordhaus and Paul Romer, awarded the 2018 Prize in Economic Sciences, have designed methods that address some of our time’s most fundamental and pressing issues: long-term sustainable growth in the global economy and the welfare of the world’s population. #NobelPrize

The concept of economic growth was jump-started by Robert Solow (who won the Sveriges Riksbank Prize in 1987) with a model that connected the decision to save with the amount of capital available in the economy. It was mostly used as a device to connect the past and the future by obtaining constant growth rates that made sure the economy scaled with time.

But economists failed to address the underlying reasons for technological progress – it was just assumed to happen – and they took the fact that it had risen enormously since the industrial revolution for granted. There was little interest in why some countries grow faster than others: after all, it was assumed, everyone in the world was using similar technologies.

Romer, it has been suggested, was inspired by a graph showing how economic growth has sky rocketed since the industrial revolution, and decided he wanted to get to the bottom of it.

In doing so, Romer changed the old approach to economic growth completely. Instead of technological growth simply happening – as if falling upon the economy from the sky – his doctoral thesis assumed that economic agents, such as people or businesses, can actively affect the speed of economic growth. The nice thing about ideas, Romer put forward, is that if I use your idea, you are not one idea short. This is different from capital, labour, and other classical factors of production. If we all produce more ideas, we all benefit from these new ideas, not just the people who produce them.

The rate of growth of GDP per person began to meaningfully depend upon the proportion of the labour force dedicated to developing new ideas. Obviously, more people producing ideas means less people producing goods in the short run. But you’d get a higher rate of growth in the long run due to more ideas leading to better productivity. Other economists followed this line of thinking (Robert Barro, Daron Acemoglu, Philippe Aghion – all prize candidates for a few years now), and the Journal of Economic Growth that covers these topics is now one of the most prestigious and most cited in economics.

William Nordhaus is known to many who studied economics 20 years ago. The Economics textbook he wrote with Paul Samuelson was translated into 17 languages for undergraduate introductory courses; I myself used a Russian translation in 1990s. Nordhaus, at the same time, had a different take on economic growth as a fundamental virtue.

Growth in the 1980s was very mechanical, aimed mostly at obtaining a certain growth rate and ignoring the fact that many economic goods, such as natural resources and clean air, are hard to reproduce. Climate change and its effect on everyone’s well-being, he pointed out, is not a part of national accounts, while profits and GDP are. Under his guidance, the Dynamic Integrated and Regional Intergrated climate models (known as DICE and RICE) were developed to take climate change explicitly into account when analysing global changes such as the Kyoto protocol.

Nordhaus’ work was not only to be included in academic syllabi: the US government’s Environmental Protection Agency used it to analyse the social cost of carbon dioxide emissions. Other economists, such as Martin Weitzman or Partha Dasgupta, were also instrumental in this field and could have shared this prize.

Fundamentally, both Romer and Nordhaus have contributed to the economics profession in the same way. They recognised that economic growth should not be driven solely by putting more stuff into factories and getting more out of them. They recognised that people can influence growth by their choices – whether that’s the speed of growth through exchanging ideas (Romer) or what that growth looks like and how sustainable it is (Nordhaus). And, most importantly, they drove many other economists toward these issues.

The digital camera industry was not “sustainable.” Careers and fortunes were ruined. Nothing can be done. Nothing should.

The digital camera industry was not “sustainable.” Careers and fortunes were ruined. Nothing can be done. Nothing should.