If We Can Raise A Ridiculous Amount To Rebuild Notre Dame Why Can’t The Same Be Done For Poverty Around Whe World?

A question asked at Quora. And answered:

Around € 1 billion has been pledged to rebuild Notre Dame. There are around 700 million people in the world still in absolute poverty. Absolute poverty being, using the World Bank definition, living on less than $1.90 per person per day.

So, we’ve got what, €1.30 (by eyeball, no calculator used) per person, once only, to alleviate that absolute poverty? Not going to make that much difference.

Oh, and we already spend much more than 100 times that every year anyway. Official development aid appears to be around $160 billion a year. Private charitable aid – no reference – is perhaps that sum again. So 200 times the Notre Dame money is raised and spent every year.

Finally, poverty isn’t going to be alleviated by us sending aid and charity to the poor. It’s going to be solved by economic growth. Which it is.

The one great fact of recent decades is that we’ve been going through the largest reduction in absolute poverty in the history of our species. This neoliberal globalisation actually works. Billions of people have been lifted up out of that destitution.

They’re producing things of value which others then purchase. As Madsen Pirie, of the Adam Smith Institute, says, to reduce poverty buy things made by poor people in poor countries. The effect is this: 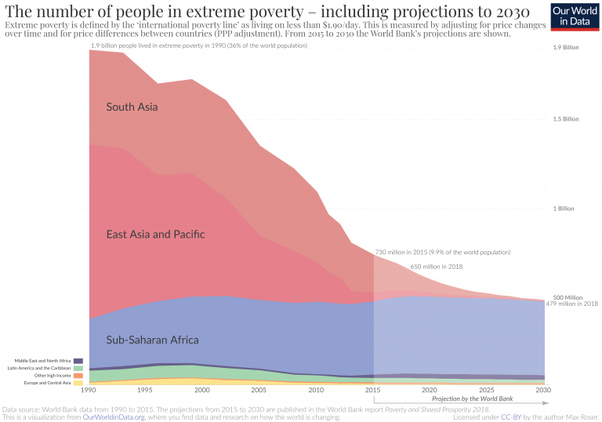 That is, we are reducing poverty, faster than the human species ever has done. In terms of that poverty reduction this rampant free market capitalism of the past 40 years is the most effective and useful economic policy ever. Foreign aid is useful but only at the margin, foreign direct investment in the poor countries is tens of times larger per annum. And the Notre Dame amount? The merest froth on the global economy, less than a rounding error.

We are solving poverty and Notre Dame isn’t going to make the slightest bit of difference either way.

There is something that annoys about these sorts of questions. Doesn’t everyone know the answer already?

The chart is interesting. In 1990 most of the world’s 1.9bn poorest were in Asia. Now the vast majority of the 700 million are in Sub-Saharan Africa. Yet most of the foreign aid for decades has gone to Africa.

A lot of the questions on Quora can be summed up as “why is the sky green?”.

That’s a really interesting chart. What is it about Sub Saharan Africa I wonder that makes them endemically poor? I suspect the real answer to that may be unsayable.