We’ve the case of British Steel in front of us. It’s not that Brexit was going to happen, It’s not that it did – obviously enough. It’s that no one knew when it would happen nor on what terms. It’s important to understand this. It wasn’t Brexit, it was that it didn’t take place on March 29th that killed the company.

For uncertainty does kill whereas changes in the terms of trade not so much.

If we left on no deal then sure, British Steel exports to the EU would face tariffs. If Brexit happened on free trade terms then they wouldn’t. No one knew. So, no one ordered. Everyone went off and made their steel orders for delivery in 6 months time elsewhere. British Steel goes bust.

But what if Brexit had happened. On no deal terms then the pud would have fallen. British Steel’s before tariff prices are now cheaper, they’ll keep some goodly portion of their orders. On free trade terms? Problem’s over, British Steel keeps its orders.

It’s the uncertainty which killed. Which should make us worry about a rise in policy uncertainty, no?

One form of that uncertainty is “What are the damn fools in government going to do next?” This is actually the major argument in favour of laissez-faire economics. Not that the government can’t do good things, sure that’s well, that’s possible. Ahem, yes, possible. It’s that we don’t know what the next set of regulations are going to be; what we may or may not do. Even what may be subsidised, and what may not be. Policy uncertainty is thus important to us. Thus, Moody’s policy uncertainty index: 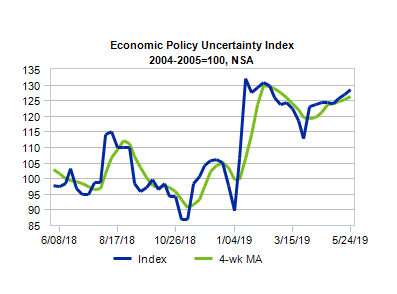 No, not time to panic yet but it’s not a good development.

And this is the financial/economic case against a second referendum (the democratic case being self-evident, one trusts). At best, it would give us an additional 6 months of uncertainty paralysis, a far greater cost to the economy than any (possible) negative effects of leaving on WTO terms.