Moody’s cut the UK’s credit outlook – that means not the rating, but which direction the rating might change in next time they have a look – rececently. It being important to understand what this means.

Which brings us to the efficient markets hypothesis. Which, as everyone other than the Senior Lecturer knows, in its weak form so universally agreed upon that it’s a tautology. So, information known to markets is incorporated in the prices in those markets. And?

So, if there’s no new or special information, then the ratings agency doesn’t have anything not available to the market in general. Or, if the EMH is true – which it largely is – then the ratings announcement will be just a confirmation of information that is already in market prices.

Here are gilts yields over the past week: 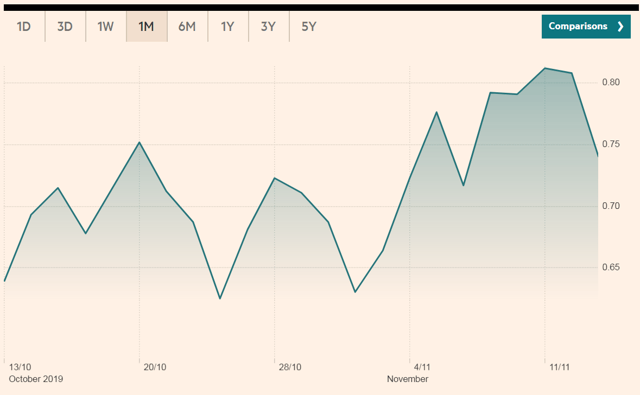 (Gilts yields from the FT)

No, this doesn’t mean that ratings or outlook degrade leads to a rise in prices, fall in yields. Rather, the information leading to the rating change was already in prices.

It’s possible to be more academic about it. This from the European Central Bank:

….rating and outlook announcements are essentially not anticipated in the previous 1 or 2 months but; vi) there is evidence of bi-directional causality between sovereign ratings and spreads in a 1-2 week window;

Yes, that’s me being very specific in my quotation. Yet, that fits with my claim. “Bi-directional” means the information is flowing both ways. Or, of course, that both are being caused by the processing of the same information.

We can even run this through the EMH again. The ratings agency doesn’t know 2 months out that it’s about to change the sovereign rating. Nor does the market know about the coming change. But as that change becomes closer, the information leading to the change gets incorporated into both models, the agency’s and the market’s.

As for the dip after the announcement, well, we’ve all heard about buy the rumour and sell the fact, haven’t we?

It’s the change in the public information that leads to both the price and ratings changes that is.