Inventive little people, human children. It’s become common knowledge among the kiddies that Google Docs has a chat function. Therefore it’s not necessary to smuggle the mobile phone into the classroom and suffer this fate: 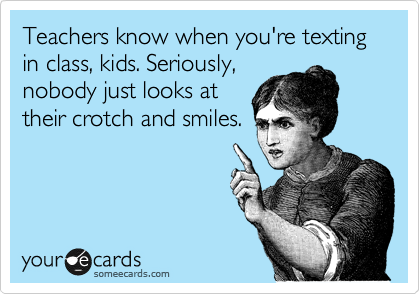 Or, as the Mirror put it:

The politely worded message gives away the teacher’s trusted method of knowing who is paying more attention to their handset than his lecture. It reads: “Dear students, I know when you’re texting in class. “Seriously, no one looks down at their crotch and smiles. “Sincerely, you teacher.”

That you rather than your could be a sad commentary on education standards these days – as PJ O’Rourke pointed out, anyone who doesn’t know what’s wrong with education never dated an El Ed major – or more likely the fact that their picture is a mock up by a student and not a very good student nor mock up.

But, as pointed out here, Google Docs now solves this problem:

As more and more laptops find their way into middle and high schools, educators are using Google Docs to do collaborative exercises and help students follow along with the lesson plan. The students, however, are using it to organize running conversations behind teachers’ backs. Teens told me they use Google Docs to chat just about any time they need to put their phone away but know their friends will be on computers. Sometimes they’ll use the service’s live-chat function, which doesn’t open by default, and which many teachers don’t even know exists. Or they’ll take advantage of the fact that Google allows users to highlight certain phrases or words, then comment on them via a pop-up box on the right side: They’ll clone a teacher’s shared Google document, then chat in the comments, so it appears to the casual viewer that they’re just making notes on the lesson plan. If a teacher approaches to take a closer look, they can click the Resolve button, and the entire thread will disappear.

The advantage of this being that of course they’re supposed to be on Google Docs anyway. And yes, equally obviously, they are doing this at home when you think they’re doing their homework. For to do that they’ve got to have Google Docs open, don’t they?

Actually, there’s an appalling coda to this. Have we actually found a reason why anyone should preferentially use Microsoft Word? Finally?

Office 365 versions of Word will also let you see other people’s comments in real time (and therefore chat). It is kind of the whole point of collaborative document editors to allow collaboration.

If they’re using laptops in class, why don’t they just use Facebook, Twitter, WhatApps, etc al with their laptops? No crotch-staring needed.

most of those websites are blocked on school computers

Continental Telegraph is a British news publication founded by Senior Fellow of the Adam Smith Institute, Tim Worstall in 2018. Its primary goal is to report political, financial and business news in a way that may jar with preconceived ideas and notions offering realist, not conformist views.
Contact us: s[email protected]
© Echion (Online)
wpDiscuz